There’s something about Touch My Blood that brings to mind the classic drama/action film, Gladiator. There are two ways to look at it, depending on how you interpret what juncture in the plot we find ourselves. The first is that of a once-powerful general (Maximus, in our case AKA) forced to become a common gladiator. The second is that of a gladiator who rises to the top of the ranks whereby he inflicts mortal punishment on his foes.

AKA and the Megacy would like to think it’s the latter, but it isn’t. He more closely resembles Maximus battling and scrambling to find his way through the chaos of the underground fight scene in the hopes that he will reclaim his glory.

As the Touch My Blood listening session drew to a close, there was an air of uncertainty among the contingent of media personnel, celebrities and influencers in attendance.  On first listen, the album seemed far from impressive, especially considering the lofty expectations AKA has set through the quality of music he’s released over the past 8 or so years and the Kanye West-like coordinated chaos that brought about so much hype.

The album roll-out has been savvy, dramatic and engaging. Even his most hardened detractors must’ve been itching to hear what the SupaMega was cooking up.

The snippets he teased on social media were inconclusive – at times they piqued our interest, and other times it felt as though he may have been given us too much insight into the sound he was going for with the album, an autotune-heavy sound many disapproved of. LEVELS, his 9 X Platinum selling sophomore, was notoriously littered with singles, and Touch My Blood ran the same risk.

“They told me to relax, I massage my own ego”, opens AKA on the gorgeous title track and album intro, Touch My Blood. As he’s displayed on similar production work such as Baddest and Bryanston Drive, AKA has a unique ability to produce impeccable flows and smooth rhyme schemes on production work such as this. It’s a personal, heartfelt song that sees him reflecting, flossing and floating on a beat like only he can.

There’s no shortage of quotables here, including this stellar passage: “Brase van Die Kaap we not from Mondeor / people in the South they bump me not Migos / I swim in the tank with sharks and not Nemos.” Tweezy – the gifted producer who produced some of the biggest hits on LEVELS (All Eyes On Me, Run Jozi and Sim Dope) – produced this as well as Amen featuring L-Tido and Fully In, which AKA says is the album’s lead single.

Fully In sees AKA throwing his weight around, dropping bars like, “You pay attention I pay my taxes” and, “Your baggage go to Cabanas, I’m at The Palace / Jacuzzi, she finna use me, orange juice me / Groupie, bad and boujee, Lil Uzi”. It’s a breath-taking 8 bar sequence that brings the album to life.

For Reset and Magriza respectively, AKA enlists past collaborators Kwesta, Jr and Okmalumkoolkat. AKA has built a career off the ability to pick the perfect features for the perfect songs. He missed a trick this time around and you sense he could’ve made more of these two songs. 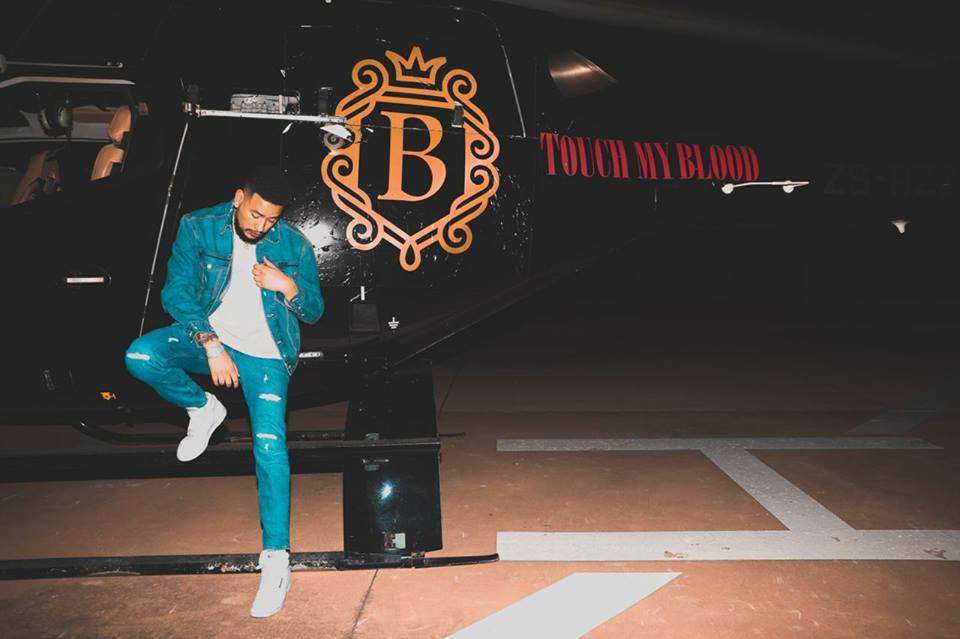 The feeling of invincibility can be self-destructive. We’ve seen it with countless pop icons including very recently, Kanye West, one of AKA’s musical idols.  Touch My Blood feels like an appropriate title given how much you get a sense of the unsettledness, larger-than-life-persona and boundless ego of this conflicted genius.

It works well as a sort of autobiography – you get to see him for all his flaws, his ambitions and, perhaps tellingly, his inability to balance his new business venture, Beam Group, with the unique demands of putting together a solid project. Strictly looking at the quality of music, there’s something missing from Touch My Blood. Maybe it’s the pure artistry of the LEVELS-era AKA who seemed concerned by nothing more than making beautiful music. In this musical climate where listeners are spoiled for choice and move onto the next faster than ever, it remains to be seen whether or not Touch My Blood will stand the test of time.

Kitchen Vibes, a modern culmination of culinary and...

A romantic night with KFC